A huge challenge for an oversized cargo directed to China 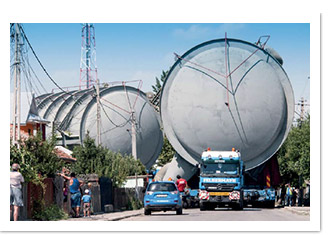 In early July, the transport company Felbermayr, conveyed eight tanks of 245 tons each, 11 meters of diameter and 22 meters of length from Walter Tosto WTB‘s site in Bucharest to the port of Constanta.
This has been another exceptional delivery for one of the projects Walter Tosto WTB is accustomed to.
Getting out of Bucharest was definitely the most difficult phase, but the staff of Felbermayr managed to perform all the operations in a very professional way.

During the transport, it was necessary to switch off and to move out of the way several electrical cables, which were running above the ground. The good coordination and caution demonstrated by the entire staff, made it possible to reach the first checkpoint after 20 kilometers and 5 hours of travel.
In the next two days, other 80 kilometers were covered in order to reach the Oltenita‘s quay and, from there, the cargo has been transported to Constanta. It has been subsequently moved on a cargo ship for onward transport to Ningbo, China. On December 11th the cargo arrived to its destination.

Some of the most important phases of this exceptional transportation are reported by the following video: